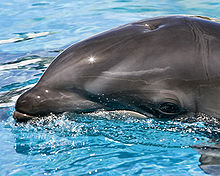 Who is that dolphin in the mirror? When a dolphin looks in a mirror, does it know it is looking at itself? Dolphin expert Diana Reiss says yes. A pioneer in the exploration of the dolphin mind, Reiss will discuss discoveries about the nature of their intelligence such as their capacity for mirror self-recognition, creativity and manipulation, vocal learning, and even using an underwater keyboard. In light of what she’s learned about dolphin thinking, Reiss spends much of her time thinking dolphin and working as an advocate for their global protection.

Diana Reiss, PhD, is a Professor in the Department of Psychology, Hunter College, City University of New York and the Biopsychology and Behavioral Neuroscience Program, The Graduate Center, City University of New York. She is a research scientist conducting dolphin research at the National Aquarium in Baltimore and a research associate at the Smithsonian’s National Zoo in DC where she conducts research with elephants. She was director of the Marine Mammal Research Program at the Osborn Laboratories of Marine Sciences at the New York Aquarium and co-chair of the Animal Enrichment Program of the Wildlife Conservation Society (WCS). Dr. Reiss served as a science advisor of the Animal Welfare Committee of the Association of Zoos and Aquariums.

Dr. Reiss’s research focuses on cetacean cognition, communication, comparative animal cognition, and the evolution of intelligence. Much of her work focuses on vocal communication and vocal learning in dolphins using observational and experimental approaches. She pioneered the use of underwater keyboards with dolphins to investigate their cognitive and communicative abilities. Dr. Reiss and her colleagues demonstrated that bottlenose dolphins and Asian elephants possess the rare ability for mirror self-recognition previously thought to be restricted to humans and great apes. Her efforts also involve the rescue and rehabilitation of stranded marine mammals including the successful rescue of the renowned Humphrey, the humpback whale in the San Francisco Bay waters. Her advocacy work in conservation and animal welfare includes the protection of dolphins in the tuna-fishing industry and efforts to bring an end to the killing of dolphins in the drive hunts in Japan. Dr. Reiss’s work has been featured in hundreds of articles in international and national journals, science magazines, television segments and features, and newspaper articles. Her new book, The Dolphin in the Mirror: Exploring Dolphin Minds and Saving Dolphin Lives was released in Fall 2011.